Growing conflicts and food insecurity: why Cameroon should rethink its land allocation strategy for agribusiness. 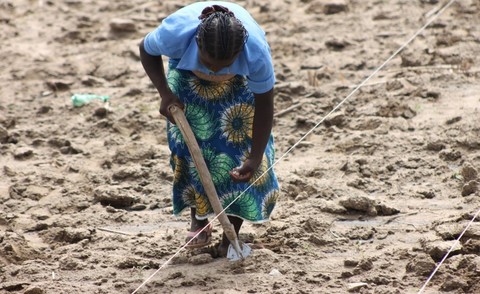 A local farmer in Cameroon during the planting season (Photo credit: RELUFA)

Agribusiness is perceived by most governments to be of great importance in stimulating development and improving local food security. But the real situation on the field is quite the contrary as local food security is largely ensured by family farms. It is therefore important to ensure that the promotion of agribusiness does not deprive local family farms from the land the need to generate local food production.

Customary land tenure, which governs 85% of the land in Cameroon, is becoming more and more insecure. These past few years, not only has the government been providing large land surfaces to agribusinesses, but elites have also been acquiring vast land surfaces in most villages. And this trend is likely to continue, judging by the government’s strategy, which has as one of its key pillars the promotion of agribusiness as a way to develop agricultural production.

However, in Cameroon, local communities through their family farms play a leading role in ensuring local food security, with more than 70% of the population involved in subsistent agriculture. For a long time, responsibility for producing food crops in Cameroon has fallen primarily on the shoulders of thousands of family farmers who generally cultivate less than 1 hectare. Most of the food they produce is either consumed locally, sold in the local market, or transported to neighboring countries.

The government promotes agribusiness based on assumptions that it will increase food production, create local employment opportunities, and generate state revenue. While these are arguably important goals, it also puts family farmers and local communities in competition with the elites and agribusinesses for available land.

Furthermore, Cameroon’s current land law only recognizes land ownership rights through the possession of a land title, a process which many customary landowners are not always eager to engage in due to the high cost and cumbersome administrative processes. Consequently, the government can legally take away customary land parcels from family farmers and make it available for agribusinesses or elites.

It is urgent to protect the land rights of these local communities not only to continue ensuring national and sub-regional food security but also because these dispossessions become more and more a source of conflicts, as illustrated by recent cases in the Ntem Valley and Nkam divisions of Cameroon, as presented below.

In 2016, Neo Industry obtained 66.000 hectares of land concession in the Ntem Valley Division of the South Region of Cameron. This land concession was contested through petitions to local administrative authorities and the Ministry of Lands by local traditional rulers and local communities who considered that they were being dispossessed of their ancestral lands. Following this local opposition, the Prime Minister signed a decree on 5 May 2021 annulling the incorporation of 66.000 hectares of land into the private domain of the State that had then been accorded to Neo Industry.

Similarly, in July 2020, the Prime Minister signed a decree annulling the incorporation into the private domain of the state of part of the Ebo forest in the Nkam Division of Cameroon and suspended the process to place another portion of the forest for logging activities following protests from the local traditional authorities, diaspora, and local communities. This concerned a total surface area of about 130.000 hectares.

Difficult cohabitation between local communities and agribusinesses has already been experienced in other localities in Cameroon. Njombe-Penja, in the Littoral Region of Cameroon, is an example. The area has fertile farmlands which have been the object of a land rush over the years by individuals and agribusinesses. Plantation de Haut Penja (PHP), a multinational banana agro-industry company operating in Njombe-Penja, significantly contributed to influencing local land dynamics in the area. The land currently occupied by PHP is inherited from previous companies established back during the colonial period with proximity to the seaport largely influencing this choice as most of their products are intended for export. The entire village is now surrounded by the banana plantation with little space left for family farming. PHP plantations in Njombe-Penja occupy 3,530 hectares of land for its banana plantation and ambitions for the expansion of its plantations have most of the time created conflicts with the local communities engaged in agriculture.

The situation of local small-scale farmers in Njombe-Penja is quite telling of the impact of agribusiness on the livelihood of family farmers. A group of 43 of these farmers, cultivating pineapple, cocoa, plantains, papaya, etc. in Njombe-Penja and whose farms were destroyed due to expansion of PHP concessions in 2005, looked for land 10 km out of the village so they could continue to cultivate and sustain their livelihoods. This situation has significantly added to their burden as a lot of money is required daily for transportation to and from the farms.

Need to rethink the land allocation for agribusiness

The cases in the Ntem Valley, the Ebo forest and Njombe-Penja show the consequences of land allocation for agribusiness on local communities, who are now increasingly organised to defend their interests. Rethinking the methods of allocation is crucial to help prevent conflicts between investors and local people, as well as to sustain family farming, which remains critical to achieving Sustainable Development Goals 1 and 2 to eradicate poverty and achieve zero hunger, respectively. When agro-industries deprive family farmers from their land, chances to reach these goals are compromised.

It is also important to complete the national land use planning process instituted by Law No. 2011/008 of 6 May 2011 and the land law, with more focus on protecting community land rights. The legitimacy of customary land ownership should be recognized, and family farmers should remain on their land. When agro-industries are given the option of choosing the land where they want to set up their operations, the needs of family farmers are always sidelined as their wellbeing is not the priority.

Given the recent happenings in the Ntem Valley and Ebo, and the current situation in Njombe-Penja, there are legitimate concerns that agribusiness and elites may continue to take away land that is accessible and vital for family farmers. Proper land planning and the enactment of a land law that responds to current challenges are needed to preserve and protect customary land rights.

Jaff Bamenjo is Coordinator of the Network for the Fight against Hunger (Réseau de Lutte Contre la Faim, RELUFA)