The right to (im)proper housing of indigenous peoples: between insecurity and a quest for dignity 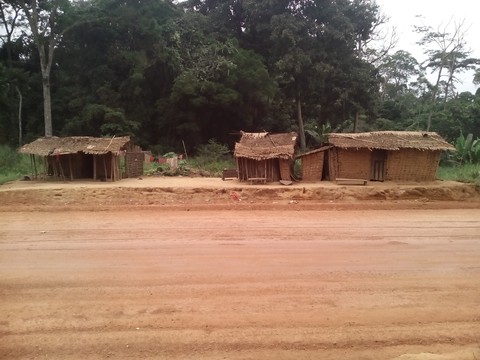 Baka dwellings in the Djouze village impacted by the construction of the road, November 2018 (Photo: CED)

The housing rights of indigenous peoples in Cameroon are still very fragile due to the discrimination they face and a disregard for their way of life in legislation, which facilitates their eviction. The ongoing land reform provides an opportunity to recognise their customary land rights and secure their territories, explains Romuald Ngono.

During the seventy-fourth session of the United Nations General Assembly, which is being held this week, Canadian Leilani Farha, Special Rapporteur on the Right to Adequate Housing, presented her Report on the right to adequate housing for indigenous peoples to member countries. This presentation, which is intended as a global appeal on the need to ensure the promotion and protection of this fundamental right of indigenous peoples, has led me to reflect on the situation of indigenous peoples in Cameroon. On the basis of the identification criteria established by the United Nations (Word document, in French only), the term "indigenous peoples" includes the Baka, Bagyeli, Bakola and Bedzang, hunter-gatherers from the forests of the East, South and Centre Regions, on the one hand; and the Mbororo, nomadic transhumant herders from the savannah and mountains, on the other hand.

As in most sub-Saharan African countries, millions of people continue to live in Cameroon in unsanitary, precarious and totally insecure conditions. While the problem affects all social groups, it is significant among indigenous peoples, who are particularly vulnerable to forced evictions, relocations, involuntary resettlements and deprivation of their traditional lands and resources. This land insecurity seriously hinders the fulfilment of their right to adequate housing.

A right enshrined in international law

Everyone aspires to live in a peaceful, safe and dignified environment: this is the spirit of the right to adequate housing in international instruments. From the Universal Declaration of Human Rights to the Convention on the Elimination of All Forms of Racial Discrimination and the United Nations Declaration on the Rights of Indigenous Peoples, the many international texts addressing the right to housing refer to freedoms and rights that include, among others:

•    the right to choose one's residence and to move freely;
•    non-discriminatory and equal access to adequate housing;
•    the right not to be subjected to arbitrary interference with one's home, private life or family;
•    security of tenure, including legal protection against forced evictions and real and accessible guarantees in the event of eviction (fair and equitable compensation and effective remedies);
•    respect for the cultural environment;
•    and participation in decision-making on housing issues at the community and national levels.

However, this ideal is not being implemented in Cameroon, where indigenous peoples' right to housing is still very fragile.

Indigenous peoples' right to housing is closely linked to their tenure status and does not enjoy any real protection in Cameroon. Indeed, these peoples share a common attachment to their ancestral lands and territories, which represent the bedrock of their existence. The forest, more than a home to them, is their foster mother, their source of health, their place of recreation and cultural and spiritual celebration. Moreover, unlike dominant groups, indigenous peoples perceive ownership as collective and based on the sharing of forest natural resources and the consumption of forest products.

These characteristics have a clear impact on their right to housing, including their security of tenure, protection against forced evictions and the provision of guarantees where appropriate.

In the various laws governing land in Cameroon (1974 Ordinances and all subsequent laws), the specificities of indigenous peoples' way of life which does not always leave a visible trace of their use of the land, have been ignored in a context where the notion of exploitation prevails. This presupposes an evident human use of the land that is likely to visibly modify its natural environment.

Violation of IP's right to adequate housing is achieved through the development of agro-industrial projects, the exploitation of forests and other natural resources, or the conservation of biodiversity. When these projects are launched on lands traditionally occupied by indigenous peoples, the latter have little voice in the matter, and do not benefit from basic procedural guarantees in the event of violation of their rights.

As their traditionally-constructed homes do not meet the criteria of a building eligible for compensation, these dwellings are systematically destroyed on the false pretext that the materials necessary for their construction are easily accessible, in total negation of the cultural and spiritual dimension that they bear.

In some cases, indigenous peoples are also forcibly evicted from project areas without a resettlement plan, and forced to settle along roads on Bantu customary land, where they have to live in makeshift shelters and face all kinds of intimidation and threats.

Tricky, but not impossible

The situation of indigenous peoples clearly shows the indivisibility and interdependence that exist between various human rights: the fulfilment of their right to adequate housing requires the recognition of their customary land rights. These land rights, which are essential for stability and well-being, should be taken into account in the formulation of housing policies in Cameroon.

How, then, can indigenous peoples' right to housing be guaranteed? In the light of the above, the issue is a tricky one, but not impossible to resolve. First, the recognition of indigenous peoples' way of life will make it possible to incorporate their specificities into the development of a national housing policy. In this regard, a synergy would be welcome between the Ministry of Housing and Urban Development (in charge of housing) and the Ministry of State Property and Land Tenure (in charge of land matters).

More broadly, the adoption of a comprehensive policy and legal framework dedicated to the promotion and protection of the rights of indigenous peoples will ensure that basic principles applicable to all future policies affecting them are enshrined in law.

Until these crucial policies are developed, there are several opportunities to legally recognise and secure indigenous territories and their collective rights to the spaces they occupy and which constitute their habitat and the resources they use, including the ongoing land reform. This reform will benefit from integrating the socio-cultural dimension of certain types of buildings and housing and taking it into account when granting compensation.

Romuald NGONO OTONGO is a lawyer at the Centre for Environment and Development (CED) and works on the protection and promotion of indigenous peoples' land rights as part of the LandCam project.