The East Region of Cameroon is the main concentration of the country's proven and potential mining resources, which have been the subject of intense semi-mechanized mining (SMM) exploitation since October 2007. In a context of increasing cession of vast portions of land for SMM, the rights granted to mining companies are exclusive and do not take into account the land rights and interests of local populations whose livelihoods depend on the land in the same area.

Among the sectors of activity considered by Cameroon’s 2020-2030 National Development Strategy as potential drivers of growth is the exploitation of mineral resources. This choice is not accidental, as the country is aware of its assets. Indeed, Cameroon is considered a "geological scandal " (in French only) owing to the diversity of its mineral resources. In fact, studies (in French only) have identified at least 52 types of minerals. This diversity is a source of interest and justifies the presence, among others, of Chinese, Korean, Indian and Cameroonian companies operating in SMM.

At the crux of this highly lucrative activity, which has been expanding rapidly over the past 15 years, is the issue of land cession in the mining areas. Indeed, the land rights of local communities are particularly vulnerable in the face of land acquisitions promoted as of public utility for SMM. This vulnerability is due to the fact that land management is based on written law that does not recognize customary land ownership. However, in practice, land management is overwhelmingly customary and collective in rural areas, and therefore few people have individual titles to land under existing law. 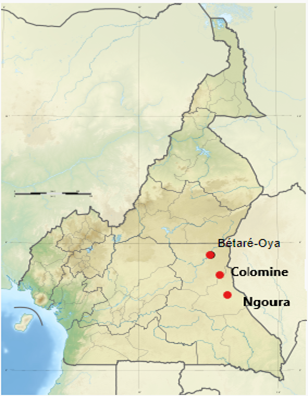 Communities in the East Region have experienced the SMM boom and its associated consequences on land. In the villages we visited, mining companies have often circumvented formal procedures to acquire land and have used informal avenues, ignoring processes of inclusive consultation and taking advantage of gaps in local government arrangements. We observe several scenarios.

In a village like Colomine in Ngoura and in the Betare-Oya Sub-division, the representatives of communities which own land were able to negotiate directly with companies. However, according to prevailing customary law, the transaction must be done in the presence of the traditional chief to be considered sealed. Such a transaction implies the sale of customary rights of ownership and access to the land as well as to mining deposits, but not land titles.

With other cases, for example in Mali, a village in Betare-Oya, the population was completely excluded from land transactions by the mining companies, meanwhile, these communities’ own customary ownership rights which stand is ignored by National laws.

In view of the foregoing, it is important to highlight that this procedure used by mining companies at the local level to negotiate land for their activities goes against the provisions of Articles 107 and 108 of the Cameroon Mining Code  and Articles 2 and 3 of the 18 December 1987 Decree on the implementation of the 1985 Law on expropriation for public utility as well as compensation in Cameroon. Indeed, these provisions provide that in order to access land, the company must send an application for the provision of land to the Minister of Mines indicating the need. The latter in return reaches out to his colleague in charge of state property who, after assessing the importance of the project, shall sign an order declaring that the project is for public utility.

The increasing presence of SMM companies has led to the scarcity of agricultural land in some localities of the East region, where communities practice artisanal gold mining and agriculture simultaneously. In Colomine, where people are more interested in agriculture because gold resources are gradually depleting, farming has equally proven to be complicated, especially on land close to the village earmarked for SMM.

This scarcity of land is more acute in the immediate vicinity of Colomine because the former mining sites were not restored at the end of their exploitation . Consequently, people are forced to look for arable land 3 or even 5 kilometres away from the village. In addition to the obstacles encountered with the distance to be covered, farmers who do not have land outside Colomine have to resort to renting new land on a short-term basis (6 to 12 months).

The situation is similar in Mali, where failure to restore former semi-mechanised mining sites forces the population to go several kilometres into the savannah to grow tomatoes and vegetables. This forced migration of farmers also leaves them with no choice than to wait for the rainy season for these vegetable crops, where they could previously carry out farming activities throughout the year in the nearby swamps of the village. This has a considerable impact on local production and, consequently, on the village’s food security.

Finally, the fertility of the land is also affected by the establishment of SMM companies. In Colomine, for example, the population complain about soil infertility due to pollution from mining activities, which modify its structure and no longer make it conducive for vegetation. In addition, there is mining waste spread by the wind and erosion. Thus, mining activities lead to the degradation of arable land and exposes communities to food insecurity

Conflicts and violations of existing laws

From Colomine to Betare-Oya, SMM has often been a source of intra-community conflicts due to the scarcity of land. Thus, people who have lost the land they used to farm are tempted to seize their neighbours’. Conflicts can equally arise between local communities and mining societies when the latter do not respect the limits of the areas initially granted or omit the phase of prior consultation with local communities during the land allocation phase.

Another source of frustration is that compensation never meets the expectations of the owners of the affected property, because mining operators are those who set the amount of compensation at their discretion, even though it is set by the Cameroonian Law. In case of denial of the proposed amount, many people have reported that the plot of land they farmed was destroyed without compensation. Some local residents of mining sites thus describe a “forced negotiation” imposed on them by mining operators.

The administration and the formal framework on compensation are thus totally excluded from the compensation process in practice. However, in order to talk about compensation, an Assessment and Evaluation Commission  must be set up by the Ministry of State property, whose mission is to "establish the rights and evaluate the property" to be expropriated, and to "identify its owners". The properties concerned are land, crops, buildings and any other visible development.

Reinvesting in semi-mechanised mining and accountability in the field

Based on the above, the general observation is that the SMM field in the East region is marked by the illegality and lack of accountability of SMM companies in their operations. For a more responsible activity that also takes into account the land interests of local communities, the administration should:

Guy Lebrun Ambomo (gambomo@relufa.org) is a Programme Assistant at the Network to fight against hunger (RELUFA) and works on research for LandCam.