Statement on the criminalisation of land rights defenders 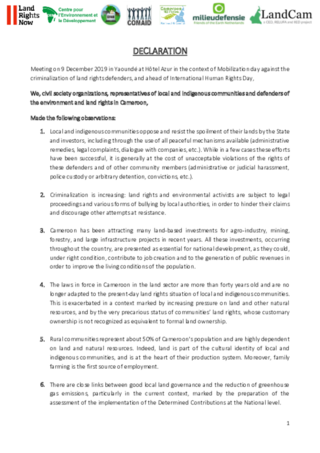 Human rights violations against environmental defenders in Cameroon are increasing. In order to raise awareness among decision-makers, the media, the general public and other bodies concerned with the defense of human rights on the nature and extent of violations of the rights of environmental defenders, and to provide them with a public space to assert their rights before the public, cases of violations were presented during a workshop on 9 December, by the defenders concerned, from the Far North, Adamaoua, North, East, Centre, South; in the presence of journalists and representatives of Cameroonian and foreign civil society organisations (CSOs). The current joint statement of CSOs and land defenders was drawn up, showing the need to fight against the criminalisation of environmental defenders.

This activity was part of the Land Rights Now campaign, which overall aim is to mobilise committed citizens, the media, communities and organizations around the world to promote and secure the land rights of indigenous peoples and local communities. The week of mobilization was held on the theme " Global Mobilisation to End the Criminalisation of Land Rights Defenders", from 2 to 9 December 2019, on the eve of the international day of human rights.