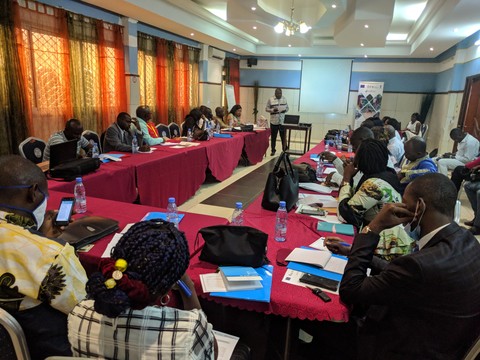 In Cameroon, despite the considerable evolution of the land reform process, it appears that some of the stakeholders, particularly journalists and the general public, are not involved and not always aware of the real issues at stake. It is for this reason that from the 21st of December 2020 to 25th January 2021 with the support of the LandCam project, journalists carried out investigations on various topics relating to land governance, specifically on:

This follows the call for proposal for journalists to produce investigative reports and articles relating to land issues and natural resource management in Cameroon launched on the 27th of November 2020.

During the land tenure week which took place from the 25th to the 29th of January 2021, the Network for the Fight Against Hunger, RELUFA, organised a restitution workshop to award prizes to the best articles and reports produced by journalists working on land issues in Cameroon. The workshop brought together journalists, representatives of civil society organisations, MINDCAF, MINMIDT, MINADER, MINEPIA and MINFOF.  According to the coordinator for RELUFA, Jaff Napoleon Bamenjo, the objective of this activity is to improve the understanding and coverage by journalists on issues of land governance and natural resource management in Cameroon.

For this edition, Emmanuel Jules Ntap, correspondent for the Voice of America (VOA) backed home the first prize for the LandCam micro-grants program for journalists. His report on ‘’mechnisms of resolving agropastoral conflicts in Botombo village in the Centre region, caught the attention of the jury as he presented a clear case of peaceful conflict resolution between Mbororo cattle rearers and farmers. He emerged first ahead of Charles Tembei of CRTV who occupied the second position and Chick Maxcel Fokwen of The Guardian Post who occupied the third position.

At the end of the restitution workshop, it came out that, there is a common challenge related to access to information when collecting local data by journalists and other actors, who nevertheless are supposed to be the real persons to provide information on land problems faced at the local level. In addition, the following key recommendations were arrived at: