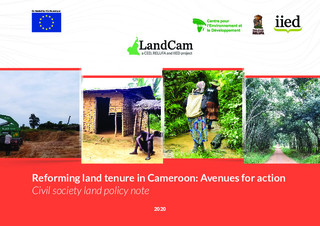 Cameroon has committed itself to a process of law reform in the main sectors of natural resources (forests, mines, land). Expressing the position of a group of organizations and citizens interested in land management in Cameroon, this document is based on the lessons learned from forty-five years of land management since the last major reform in 1974 and on new developments in this domain. It also draws inspiration from proposals made by civil society to the land administration and from international law.

Five principles are proposed to guide the reform, with the vision that land law should be constructed in a way that is both participative and inclusive of individual and collective land rights, secured by an efficient, prompt and inexpensive justice system, and an administration that protects the rights and interests of beneficiaries and communities holding legitimate land rights. In addition, measures are proposed to restore a climate of trust between communities and the administration in charge of land management after the texts resulting from the reform are implemented.