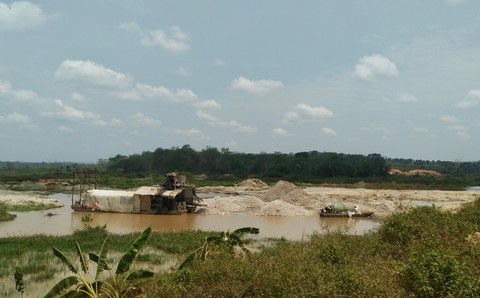 Titre Auteur via: Source CC BY 4.0

The acquisition of land by commercial actors often hides the less visible transfer of access and use rights to other resources such as water. Several cases in Cameroon demonstrate that land grabs can also entail water grabs, and highlight a legal vacuum around the protection of rural citizens’ water tenure rights.

At a recent LandCam workshop, women living near to agribusiness plantations denounced the various forms of abuse they face. Their testimonies made clear the sometimes-less-visible link between violations of land rights and water rights. Women from Bidou II village (Ocean Division), which is surrounded by three industrial concessions (see the map below), complained that companies regularly dump waste into watercourses. Some studies (see paragraph 42 [in French]) suggest that this would have affected soil quality, among other problems. And indeed, this corroborates with the observations of villagers, who reported that harvests over the past few years have been poor, with many rotted crops and lower yields. These commercial operations consequently seem to have strong impacts on food production and security. 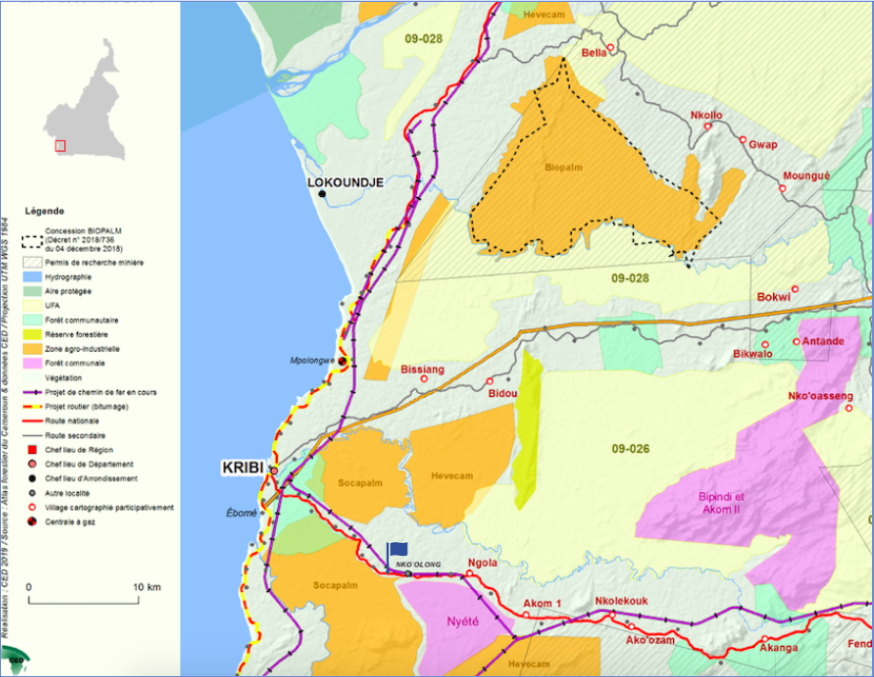 Bidou II is not alone – there is a long list of human rights and environmental harms which are recurrent across the spectrum of agribusiness, mining, oil, infrastructure and logging projects in the country. Yet water rights have received comparatively less attention. We have noted a few trends:

A distinction must be made between the right to water, an international principle that refers to the human right to safe drinking water for domestic use (itself not explicitly recognised by the State, despite its ratification to several international instruments that protect this right), and rights over water resources, which refer to tenure regimes. Cameroon’s water code [in French] only vaguely mentions the State’s responsibility in “facilitating access for all” and in managing it (2.1).

Inland over and underground water bodies are held by the state and citizens have use rights over public water resources. Historically, water has been accessed and used following customary law, similarly to land. The present-day water governance framework presents a number of weaknesses that hamper the sustainability of said customary practices.

The Ministry of Water and Energy (MINEE) has the stronger mandate in national water governance, but responsibilities are shared across numerous ministries and institutions –  albeit with little coordination as is suggested by several studies (and here [in French]), hindering the coherent governance of water. We note that there exist few links with the land administration (MINDCAF), thus creating two very distinct regimes for water and land despite the two being closely linked.

Other major shortfalls include:

In addition to the institutional weaknesses described above, abuses of power by commercial actors and the state for private benefits have caused the disruption of local rights. Some state-investor contracts in Cameroon indeed demonstrate that the government has explicitly conferred “first use” rights over water resources to companies in land transactions, thus overriding citizens’ rights and endangering their capacity to meet basic needs.

“the investor and any investor party shall have the right […] exclusively within the production zone, to take and use water, land, rocks, stones, sand, clay and gravel that have no significant commercial value […] based on how the investor sees fit or useful to its activities, without any other authorisation and free of charge.”

The contracts contain additional provisions that secure access for investors in the long term and reduce the power of the state to regulate the use of water, even in the event of a law reform.

Worse yet, the government voluntarily surrendered its regulatory power when it privatised a formerly state-owned oil palm company by approving this clause in the contract:

“[…] the State gives [company name redacted] a grace period of three years to realise necessary investments with respect to applicable norms concerning for example wastewater and revokes its own right during this period to sanction the company for not abiding by the enforceable regulation.” (6.7)

The impacts of these legal agreements are felt by rural communities. Water is still a major source of complaints from local communities living near the above-mentioned privatised palm oil company. And concerning the international rubber and oil palm company mentioned just before, the parent company’s 2019 annual corporate report provides figures for the concentration of various chemicals in effluents that far exceed legal limits.

Land and water should go hand in hand

Cameroonian civil society has long alerted government authorities and the wider public about rights violations associated with large-scale land-based investments and gaps in national regulations and governance. Among these limitations, we find the disconnect between the legislative frameworks overseeing land and water resources which offers little protection to rural citizens and could increase vulnerability.

The ongoing land reform is an opportunity to coordinate the land and water tenure regimes and give stronger protection to rural communities by:

Amaelle Seigneret is a Land Rights consultant at IIED and works on the LandCam project.