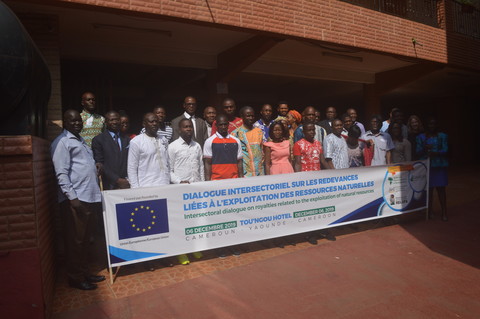 On December 6th, 2019, RELUFA organised in Yaoundé an inter-sectoral dialogue on royalties related to the exploitation of natural resources (forests, mining, hydrocarbons and land) in Cameroon. This workshop brought together representatives from different ministries (MINDCAF, MINMIDT, MINFI, and MINFOF), councils, companies and civil society, with the objective to contribute to a reflection on the coherence of policies and legislation governing the allocation and management of royalties linked to the exploitation of natural resources in Cameroon.

Indeed, under Cameroonian law, the royalties regime differs from one sector to another. We noted that the texts on land tenure and other natural resources are often in contradiction, or lack coherence. The ongoing reform of the land and forest regimes, which comes after the reform of the mining and oil regime, provides an opportunity to improve coherence between these texts.

This workshop was an opportunity for participants to improve their knowledge of the different types of royalties, to learn more about the discrepancy between law and reality, and to share or exchange on their experiences in this field. The participants thus identified the issues and challenges associated with royalties for each sector, which led to a reflexion on possible courses of action to promote a fair and effective redistribution of royalties to communities affected by natural resource development projects.

Group discussions prompted participants to deepen their thinking. During these discussions, the need for an effective, accountable and decentralised governance framework emerged as a main and fundamental concern for the fair redistribution of royalties. Indeed, participants agreed on the need to consolidate and harmonise the various sectoral laws so that they meaningfully protect the rights of the populations in contexts of natural resource exploitation. However, they pointed out that there is also a need for a structure that will enable their successful implementation, with institutions whose roles are clear, representative of the interests of citizens, and which will give them the space to participate in decision-making.